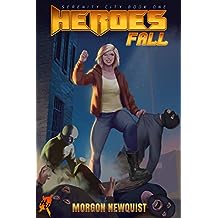 He wanted to be a good man. Instead he became a hero.

Twenty years ago, Serenity City’s great Triumvirate of heroes – Achilles, the Banshee, and Pendragon – maintained a golden age of peace and prosperity. Then, in an instant, it all went wrong. The city’s mightiest champion, Achilles, lost his mind during a showdown with the enigmatic supervillain Thanatos and went on a rampage across the city, leaving the Banshee dead and a swath of destruction in his wake before Pendragon could stop him.
Today, as Achilles rots in solitary confinement, Victoria Westerdale investigates a new mystery. Why are young and forgotten heroes disappearing off the streets? Why doesn’t anybody else care? And how is it tied in to those infamous events that brought the city’s greatest heroes to ruin?
And what’s going to happen to them all after Achilles escapes?