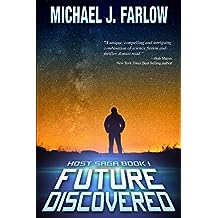 All Van wanted was a peaceful place to get away from noise and stress. Instead, he stumbles on alien technology hidden in the mountains of Arizona and his plans vanish. Presiding over the new technology is a pushy AI who recruits (blackmails?) Van into assisting him. Van discovers the extent of both the cache of technology and its importance to mankind.

However, unknown to both Van and the AI, there is another human who has plans to defeat both Van’s efforts, and mankind’s ultimate survival.