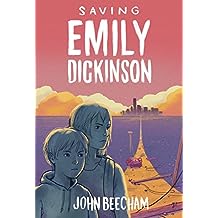 IF THE WORLD WAS ENDING, WHAT WOULD YOU SAVE?
APRIL 22nd-23rd, 2044: twin coronal mass ejections shear off the earth’s upper atmosphere, turning North America into an irradiated wasteland.
LATE SEPTEMBER, 2046: As humanity fights extinction, London Yardley ekes out an existence on the plains of Nebraska with her reclusive father, her inventive little brother, and a golden retriever mix named Emily Dickinson.
Despite her father’s warnings not to leave the perimeter, London has begun to cycle the country roads late at night, desperate to escape the isolation and pointlessness of her life.
Not until pirates steal Emily Dickinson does she begin to map those roads, setting out on a quest that will put her on a collision course with evil.