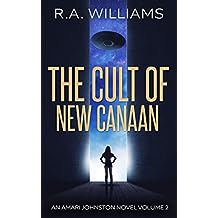 A feisty young private investigator hunts a UFO cult that attempts to steal the Shroud of Turin. In a twist of fate, she and her boyfriend find themselves captured by the very cult they pursue. Her father unravels clues previously discovered by Amari in a frantic attempt to rescue them before they fall victim to the cult leader’s suicidal vision.
This is Volume 2 of the Amari Johnston series but also reads as a stand-alone novel.