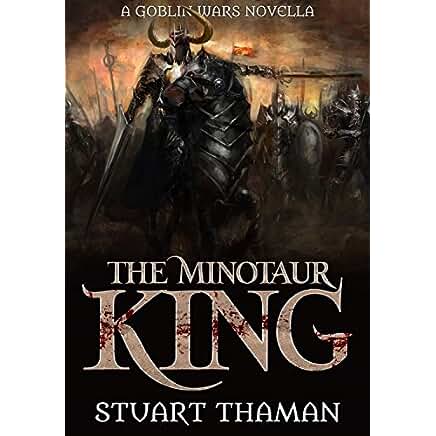 Welcome to the world of The Goblin Wars, the best-selling epic fantasy series from Stuart Thaman! Whether you’ve read them all or are a brand new fan, you’ll love The Minotaur King. A short read, The Minotaur King follows Qul’s rise through his mountain clan—full of treachery, brutal combat, and dark magic.
Qul has always wanted to be a royal guard, but to even get close to Queen Ilo, he’ll have to pass the annual Brood-Fight. Only one minotaur succeeds the Brood-Fight each year, and many of the others don’t survive. And then there’s a secret, one that could get Qul killed outright, but one that also holds wild potential. Someone is lurking around his mountain home, and minotaurs do not take kindly to strangers. Faced with death around every corner, Qul’s ambitions quickly shrink from royalty to survival. And the minotaur clan has no room for weakness. Not a single inch.
Be sure to check out the rest of The Goblin Wars by Stuart Thaman. Epic fantasy, heroic battles, and war on a grand scale. Fans of Dungeons and Dragons are sure to fall in love with the whole series!