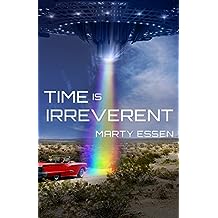 An irreverent, liberal, twisty, time travel comedy! What if you could make a change to history that would eliminate slavery, World War II, global warming, and an egomaniacal US president who thought he was smart enough to drop nuclear bombs here and there without negative consequences? What if that change also made the United States and 5 billion people poof from existence? Would you do it? Spanning from the Cretaceous period to 2056, Time is Irreverent is a hilarious, thought-provoking satire with colorful aliens, huge dinosaurs, a smokin’ hot lesbian from the future, and a cameo from Jesus Christ himself!