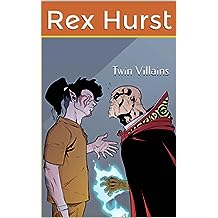 Two stories of alien villains in a galaxy at war. The first deals with a space pirate serving a life sentence in a military prison on a bleak planet. Rather than rot away for the rest of his life, he makes one last desperate attempt to escape. The second deals with a hidden cult on a planet dedicated to pacifism. The leader of this ancient religion must do anything he can to prevent its exposure or else his family will lose everything.